Montreal-based artist Steven Woloshen has been making short abstract films and installation pieces since 1982. He specialises in cameraless animation, also known as direct animation – scratching, painting, drawing, destroying or otherwise directly interfering with strips of film themselves. This kind of animation process has at its heart a deep engagement with materials, restrictions and chance, and Steven’s work displays the wealth of extraordinary results possible within an apparently limited approach. In 2004, he embarked on a unique 10 year long film project, working on frames of 35mm film in his car whilst employed as a driver on film sets. The resulting film, ‘1000 Plateaus’, was finished in 2014 and has already been screened in many festivals around the world including Ann Arbor, receiving several awards along the way. 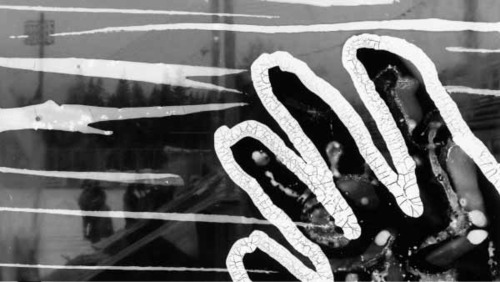 Still from ‘The Babble on Palms’ by Steven Woloshen (2001)

Steven’s work regularly appears at festivals and galleries. He has received numerous commissions and frequently gives lectures and masterclasses. In 2010 he published ‘Recipes for Reconstruction: The Cookbook for the Frugal Filmmaker’, his first book on the subject of decay, archiving and handmade filmmaking techniques. He has just released his second book, entitled ‘Scratch, Crackle & Pop!‘, exploring the techniques, processes and tools of the trade through in-depth case studies of thirteen of his own films. I talked to Steven via email to find out more about his work and creative process.

EoF: Can you tell me a bit about your background and how you came to the particular medium of cameraless animation?

SW: I’m glad that you’re asking me this now. I am sure that as I age, I must be forgetting a lot of these early memories. As far as I remember, I joined a Super-8 film club in 1972 at the YMCA. We made a lot of films, but the activity that I remember the most is drawing on 16mm clear leader with felt tip markers and pens. Like most kids, I filed this social activity in the back of my memory. When I was in my last year of high school in 1977, I rediscovered handmade filmmaking. At that point in time, my parents owned a Super-8 camera and projector. We took it on our family outings and holidays and usually shot a few rolls. They were silent, of course. After a while I began to scratch them with scissors then run them through the projector. I loved the “damaged” look. I used to add sound by playing a vinyl album as I screened the film. It was great entertainment for my friends and I. At that point, I couldn’t stop.

EoF: How has the reception to cameraless animation from audiences / festivals / programmers changed over the years you have been making this kind of work?

SW: When I began distributing my 16mm hand-made films to international film festivals in the mid-1980s, I got a bit saddened by the poor response. I really loved these early films and it took a lot to convince other people to watch.

In 1984, I brought my films (three at this point) to the National Film Board of Canada for some feedback and guidance. Naturally, they told me that they already had a McLaren and there was no need for another. I spent a long time drifting within small gallery screenings and local festivals. In 1999, I began to produce and distribute on 35mm film print. I also made VHS and Beta SP copies for festivals that didn’t have 35mm projectors.

This formula really worked. I was able to reach more programmers and festivals. By this time, very few artists were interested in creating hand-made films for animation festivals. I had watched a lot of contemporary, direct cinema but it was mainly for experimental festivals. Suddenly, I was a new voice in hand painting on film (what irony).

EoF: Can you describe your setup for making cameraless animation and how it has evolved over the years?

SW: Originally, my technique began like most other filmmakers; a strip of film on a hard surface with a light source below the film and above my head. Slowly, I was looking to increase my own comfort level as I was animating. For example, I made an animation device out of an old bicycle frame. When that fell apart, I used old Ikea furniture as an animation table. And so on. When I began working as a dailies editor for Warner Brothers, I had the idea to turn the block synchronizer sideways, thus turning an editing tool into an animation tool.

‘When the Sun Turns Into Juice’ by Steven Woloshen (2011)

EoF: How much planning do you put into your films in terms of working out the imagery and structure ahead of the physical process?

SW: Once I have found the perfect musical score, I try to do as little planning as possible. Instead of planning visual movements, I memorize the score and I become more of a visual musician. I move through the sound, riff by riff and movement by movement.

EoF: Does your working process incorporate chance to a significant extent? If so can you describe how and to what end?

SW: I would say there is a lot of chance in my work. Since each frame is like a thumbnail-sized canvas, I have to capitalize on random chance to explore the abstract occurrences that reveal themselves on every frame. For that reason, I try to avoid pictograms and icons. I want the surface tension to tell its own story.

EoF: Do the limitations of your materials and process play a significant part in being able to achieve the results you want?

SW: Yes, I would say that the limitations are part of the process. I have to really think about what I can achieve on such a small frame. How can I transmit my love affair with the music to the viewer? I admit though, I really had to make a lot of mistakes to eventually understand my medium and materials, to have made 40 films. I also have a good relationship with the technicians who digitize my material as well.

EoF: With ‘1000 Plateaus’ you integrated your filmmaking process into your everyday life to a considerable extent. Has this also been the case in your other films? What do you think the effect of this integration is on the films themselves?

SW: I love experimental animation. I can’t see myself living without some sort of daily creation. That being said, I knew I would have to find ways of maintaining a creative workflow despite the realities of life.  So, I made films in a car when I was a driver (the results were ‘1000 Plateaus’, ‘Shimmer Box Drive’ and ‘Optical Itzak’), I collected lost leaders of film when I worked in a lab (that was ‘The Babble On Palms’) and now I’m collecting shards of frames in my new role as conservation technician at the National Film Board of Canada. Each job produced a new methodology and a new workflow.

EoF: You have written several books and are often invited to give masterclasses on cameraless animation techniques at festivals. Can you describe how these activities came about and have developed?

SW: Well, it is like I mentioned in the preface of the new book, speaking out on the subject of handmade film sort of lead me to masterclasses. Viewers and fans of direct filmmaking were curious about my patronization techniques and my tools. After a dozen years, the questions became so familiar; it became a dress rehearsal for the writing. Both books could have become a very long Q and A. Of course, I wanted to do much more such as DVD samples and illustrative photos. 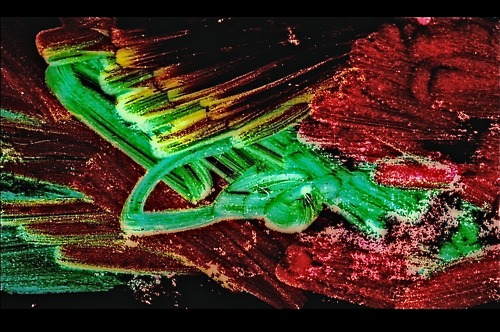 EoF: Can you tell us a bit about your new book ‘Scratch, Crackle & Pop!’?

Before I began the writing, I researched the field and only found a handful of topics. Naturally, I tip my hat to the book compiled by the late Helen Hill, titled ‘Recipes for Disaster‘ and the UNESCO pamphlets that were written by Norman McLaren. Those were my bibles. I have been looking for more ever since.

I wanted my book to have a few new twists. I wanted a DVD of case studies so I included 13 films that I self-produced since 1999.  I also wanted to add 35mm leader into the book so the reader could try stuff. I wanted to pour my personal knowledge into this project. I wanted to share everything that I learned about making hand-made films.

EoF: What are you currently working on?

SW: Hmmm. Lots of things. I want to start research on a new book about finding film. I am planning several new films, live performances and installations and naturally, what is life without children’s workshops? 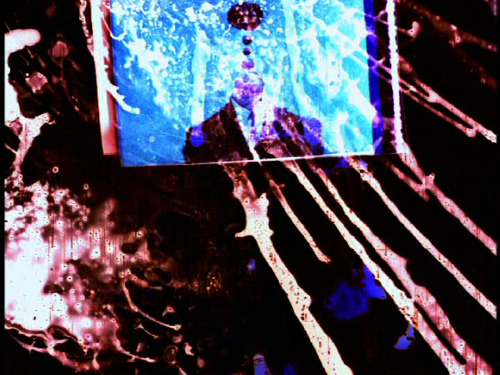 Still from ‘Rebuttal’ by Steven Woloshen (2005)