Masha Krasnova-Shabaeva is a Russian artist and illustrator currently based in Rotterdam. She has made drawings, paintings, posters, wallpaper, murals, books, comic strips and t-shirts, as well as two short animation pieces; The Lake (2011) and The Classroom (2012). Across these different forms her work shares a unified aesthetic; a drawing style which recalls illustrations of a bygone age, manipulated in a distinctly contemporary way. Her selective mutation, distortion and layering of these images of the past connects to ideas of memory and personal history, as she discusses in the interview below. Much of her work has a mysterious, haunting atmosphere, and this is especially tangible in her two films. These beautiful, subtle works take us into the inner space of the imagination, of dream or memory, where time and space has collapsed and compressed. There is a sense of stasis, of being in limbo; as if somehow we are seeing just glimpses of infinite cycles of events.

The Classroom (2012) by Masha Krasnova-Shabaeva

Both of Masha’s animations are based on a static point-of-view of a single space, with characters and objects appearing on and disappearing off screen often in short, repeated cycles of movement. In this respect one might note some immediate similarities to Zbigniew Rybczy?ski’s Tango (1980), but beyond this there are clear differences. The most obvious of these is that Masha’s films are constructed from drawings, allowing her to create a wholly different conception of space to that depicted in Tango.

Although each film presents a fixed view of its setting, only some of the things on screen inhabit it as a three-dimensional space, whilst others fail to align themselves to it, float over it, overlap each other, appear at a different scale or angle. The space simultaneously functions as a ‘real’ environment for some of the action and as a flat backdrop for other elements. The use of bright, flat colours and the way characters and objects are distorted, cropped or positioned suggests the use of digital tools like Photoshop, contrasting with the perceived authenticity or preciousness of the hand drawn image.

Ultimately, beyond the films’ visual style or formal invention, it is what lies behind them that I am drawn to. There is the presence of something unspoken which seems to come through the films, especially in The Classroom. Like a mysterious code I can grasp only part of, I find Masha’s work as mysterious as it is fascinating. In the interview below Masha discusses her working process, and some of the ideas and inspirations behind her films.

The Lake (2011) by Masha Krasnova-Shabaeva

Can you give me some background to how the films ‘The Classroom’ and ‘The Lake’ came about? Had you made animation or other films before?

The Lake was my first experience as an animator. Before I worked on other animations (mostly advertising) as an illustrator, but never tried to do it on my own. The Lake was made as a part of my earlier series The Silent Earth, which included drawings, a book and a few small sculptures. It was supposed to be my personal show in one of Rotterdam’s galleries, but unfortunately due to different reasons it never happened. I wanted The Lake to be some sort of a looping visual and sound background for the whole show. The whole subject of this series was life after the end of the world, some sort of life after death. So I wanted to express this feeling in my animation in the most primitive way as possible, because I didn’t have much time to produce this short.

In October 2011 I started to work on my new series The School Diary. I had this idea for some time already. I’ve always been interested in the Soviet and Post-Soviet educational system. Every authoritarian state needs to control people in all aspects of their life. Of course school is an ideal place where you can teach people what they can be and can do, and what they can’t. School in Russia is a totalitarian system with clear hierarchy. At least it was when I grew up. If you’re a student, you’re a lower being, just an extension of the teacher. You don’t have any right to express yourself if you don’t meet certain requirements. In my series I’m trying to compare the school to a dysfunctional family, which in my opinion are very similar in many ways, but different in scale. It’s also very personal for me because my family was not functional at all.

Were the films planned out before making them or did they evolve organically?

I’ve been trying to make storyboards and animatics for each animation, but I guess it’s not for me. Finally the most things were not planned at all. Every time it was an improvisation of some sort. 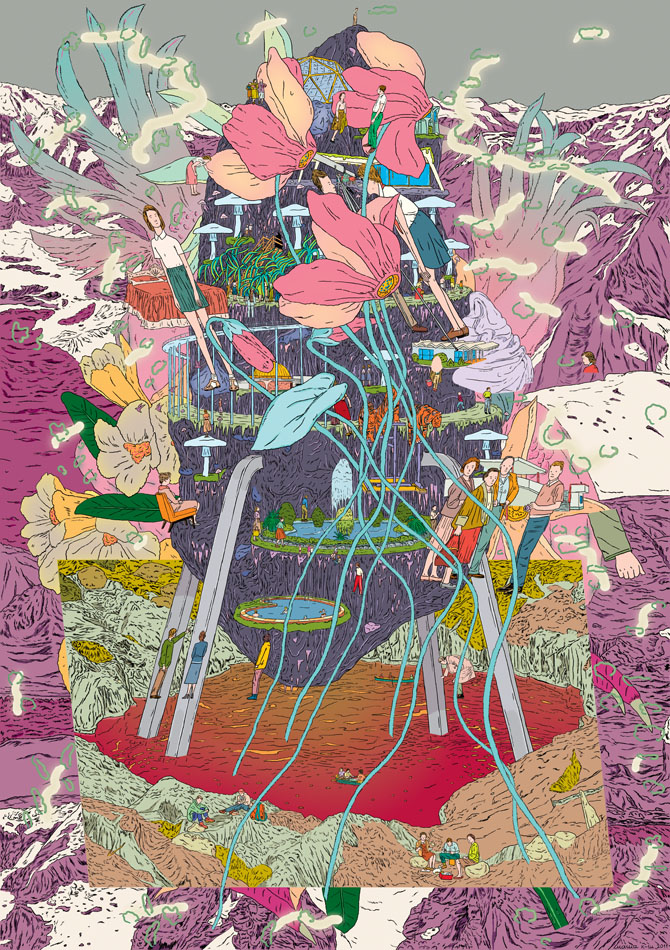 The Classroom was made ‘in collaboration’ with Timur Shabaev, and on ‘The Lake’ he is given special thanks. Who is Timur and what role did he have on each film?

Timur is my husband. He’s an architect and works in an architectural office (OMA), but sometimes he helps me with some technical issues I have in my work. For example, in these two films he helped me a lot with animation process and sound. It’s really nice to have a person at home who is interested in what you’re doing and with whom you can discuss your ideas and problems.

The use of looping and overlapping figures and actions in time and space makes me think of things that have happened in the same place over time, of history and of ghosts. There are some very beautiful and mysterious things in both films, and a very special atmosphere, especially in The Classroom. Can you tell us what your ideas were behind each of the films?

I guess I’ve already told everything while answering the first question. And you’re right: it’s my way of telling stories about ghosts and dreams. Also I was born in Ural, in Russia, when there was total devastation after the collapse of The USSR. I’m really inspired by my home country in many ways. I try to study it through my art. And I create my small post-apocalyptic world on the basis of my memories of my home, of the time when I was a child and on my childhood fantasies, which were more grim than cheerful in many cases.

Were there other animations or films or other art works that inspired you in the making of these films?

Exercises in Preparation For Independent Life (1980) by Priit Pärn

Can you tell us what the writing on the blackboard in ‘The Classroom’ says (in English?)

Are the two films The Classroom and The Lake completely separate works or do you see them as going together somehow? Do you feel they relate to each other in terms of subject matter?

Of course they are related to each other in many ways. Maybe because they were made in a short time one after the other. I view The Lake as the first try, more of a first draft. And I really tried to make The Classroom more complicated. For sure it wasn’t easy, because we are amateur animators, not professionals. But I hope that the future works will be much more sophisticated and interesting.

The sound design on both films is very effective and works really well with the image. How did you approach making the sound? Did you build it up before or after the animation?

Our approach to making the sound was again kind of amateurish. For the first video we just went to the forest and recorded the sounds using iPhone. For the second one we used a fragment of a song from my home country. It’s a song in Bashkir language, this is the main ethnicity in our region and I’m also half-Bashkir. The name of the singer is Flura Kildiyarova. Besides I recorded some sounds with my phone again water flowing, singing, etc. We built everything up after the visual part was ready.

In the films and in your other work you often have figures that are chopped in half, distorted or overlapping. What does this treatment of the figures mean to you, is it more an aesthetic or symbolic decision?

It’s my way of recreating a dream, something unreal. Everything and everybody is floating around and changing the appearance constantly. I believe it’s symbolic as well as an aesthetic decision. 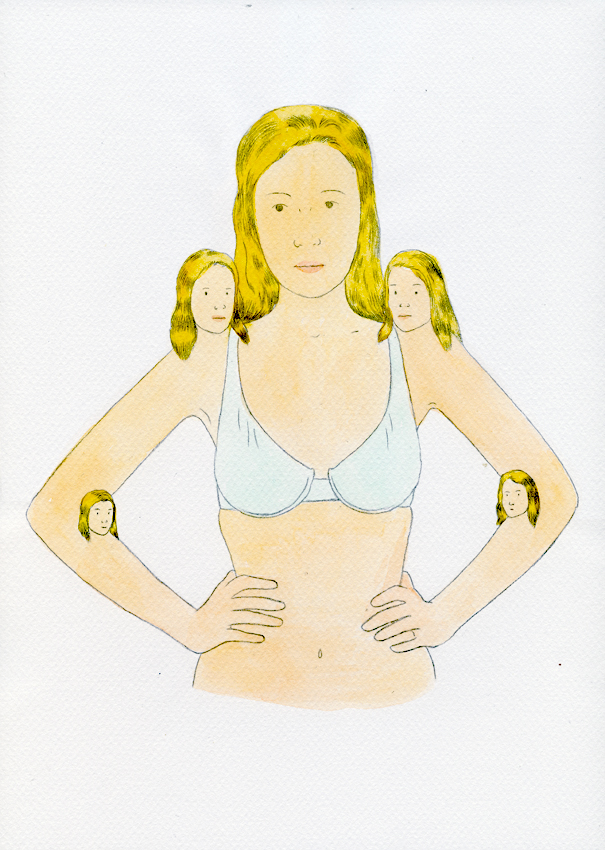 Family (2009, 1 of 18 drawings, diverse sizes, graphite and watercolour on paper)
by Masha Krasnova-Shabaeva

I watched a video online (from Bang Bang Studio) of you making a drawing using source images from the internet. Can you say something about how you use source material, how you approach it and how important it is to your process.

It is always different: for some images and parts of the images I use source material, for some I don’t use anything. Source material helps me to be more confident in things I’m not sure about, such as architecture. Usually I find a lot of images on a subject and try to create some kind of new image with them. Sometimes the final image looks like collage, but often it turns into something completely different. In other words it’s difficult to describe the process, because every time it’s not the same, it changes frequently. So the video you saw is just one way, but there are many others.

Is your working process of making illustration work for clients particularly different from the way you make you own personal work? Do you feel the two areas of your work relate to each other or are they quite separate in your head?

I’ve been working as an illustrator for almost 10 years already. In the beginning I didn’t know anything about illustration, I changed my style and technique a lot. I consider myself lucky because I’ve had a lot of clients who would let me experiment. And at the same time I’ve made some art projects and they were also very different. It took me many years to develop my own style, to make the illustration works look less commercial and make all my works look more coherent. It makes me feel better, when I don’t have to separate editorial and personal work in my head. 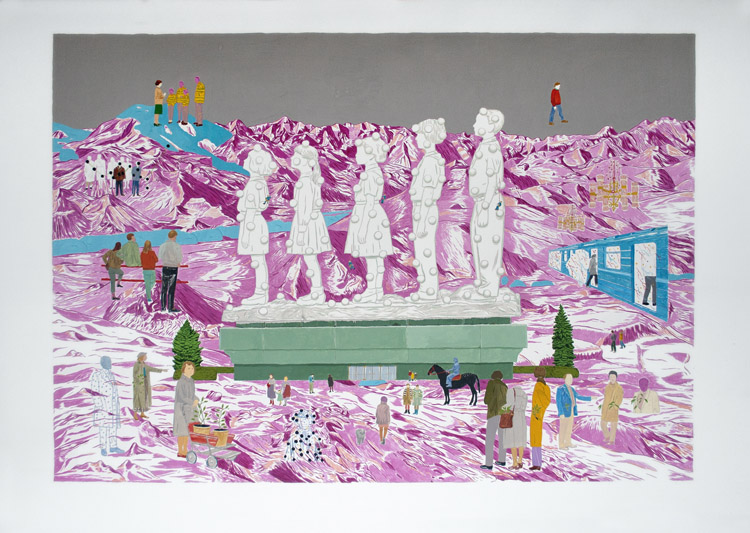 From The Silent Earth (2012, series of drawings, diverse sizes, gouache on paper)
by Masha Krasnova-Shabaeva

Do you think you will make any more animated films? How do you feel about the ones you have made?

Sure I would like to make more films, and I have many ideas that will work best in this format. The only problem for me is that animation is a very time-consuming thing to do. It’s difficult to find enough free time for this when you also have to make commissions as an illustrator. But I hope I’ll manage to do this.

I feel very intrigued by them, maybe not as a viewer, but as an artist. Every time we make an animation it seems that I discover so many new opportunities. I should say that not the final result, but the process itself is the most interesting part for me. So each time I’m really curious what I’ll discover next. 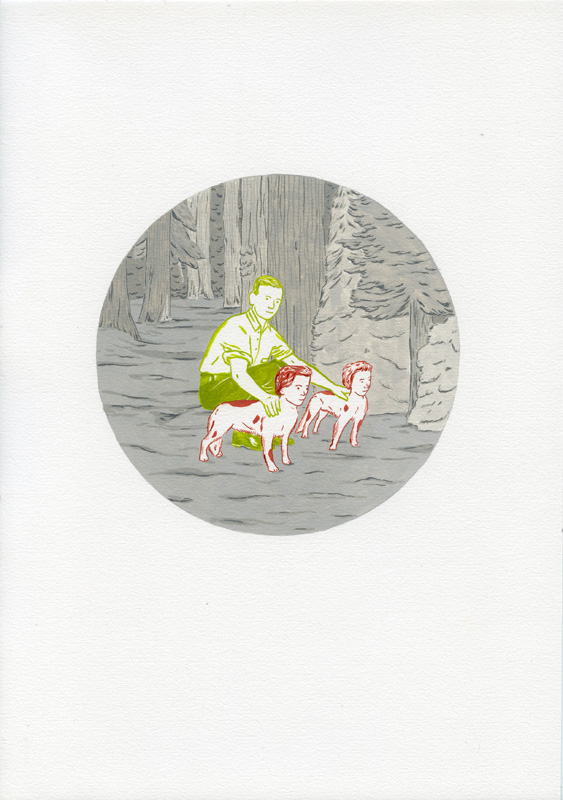 From The Silent Earth (2012, series of drawings, diverse sizes, gouache on paper)
by Masha Krasnova-Shabaeva

See more of Masha’s work at her website here