Still from Little Red Giant, The Monster that I Was (2016) by Laura Harrison

The films of Laura Harrison are messy, saturated, twitchy and visceral. Constantly changing and shifting, each image is multi-faceted, multi-layered, sometimes a sketch, a photo, a painting, a computer drawing. We see sections of animation re-filmed from monitors, overlapping with the original sequence, superimposed over a photo, partially hidden under some paint, replicated, cut up and redrawn. Everything is happening all at once. Nothing is pure. The textures of paper and paint mix with digital distortions; the pixelated smudge and the ‘authentic’ smear of paint co-exist. All this creates an effect greater than the sum of its many parts; a whole body. The constantly changing balance of elements has a consistency and clear vision behind it that ensures everything fits, in its own wonky, unexpected way. Animation doesn’t need to mimic, refine or caricature movement to depict ‘reality’, it can conjure its intangible essence through other means. Laura’s animations evoke the unpredictability and intensity of life, of people, in a singularly vivid and exciting way.

The characters and stories depicted by this spectacular visual display provide a whole other dimension to her films. The visual experimentation constantly unfolding could hold our attention on its own, but guided by her captivating voices and unravelling tales, the films become windows into the chaotic lives of marginalised characters who don’t make it into animation often enough. Brutality, tragedy, drugs, sex and death are rife, but in tales told to us with great wit and a fantastic turn of phrase. Laura is a really exciting animator and her films get better and better. I was thrilled to interview her via email about her work and process.

The Lingerie Show (2015) by Laura Harrison

Can you give a bit of biographical background about yourself?

I was born and raised in Maplewood, New Jersey and migrated to New York City where I worked in publishing and studied painting at the New York Studio School for Drawing, Painting and Sculpture, after which I moved to Cambridge to get an animation and painting MFA at The School of the Museum of Fine Art. Shortly thereafter I attended School of the Art Institute of Chicago for a film and animation MFA. I currently reside in Chicago with two cats, a lizard named Muddy and my partner, Chris Sullivan.

How did you end up working with animation?

I was growing increasingly bored with painting and after taking a number of fiction writing and graphic novel classes, it occurred to me that animation could provide a good segue into and out of painting (I could also use the texts I was writing to create images that were personal and more meaningful to me). Then I attended the Ottowa International Animation Festival, and realized without question that animation was for me.

Tears For Narcissus (2013) by Laura Harrison

How does your approach to animating relate (or not) to your painting practice? There are strong elements of character and narrative in your work, do you tend to begin working in animation with the writing or the images first?

The characters I create tend to drive the story which in turn informs the images (although that is something I would like to change about my approach to my work). Generally, I am drawn to people who are living on the margins of mainstream culture with their own subcultures: addicts, personality disordered types. Aging, perimenopausal women. Their messiness is in keeping with my somewhat shaky, painterly hand.

Your animations have a very vibrant, dense and quite singular aesthetic, seemingly the result of many different processes. Can you describe the processes involved in making your films and how this way of working has developed?

My processes are a function of my improvisational approach to animation led by my aesthetic.  I am interested in creating a certain visual intensity and color saturation, to create a tactile quality that affects the viewer viscerally. I often start my pieces with hand drawn painted animation which is then put into the computer and layered in Photoshop and Flash. I also use After Effects. Sometimes I multiplane to create a sense of palimpsest. I also use 2D puppets. Which is quite fun. 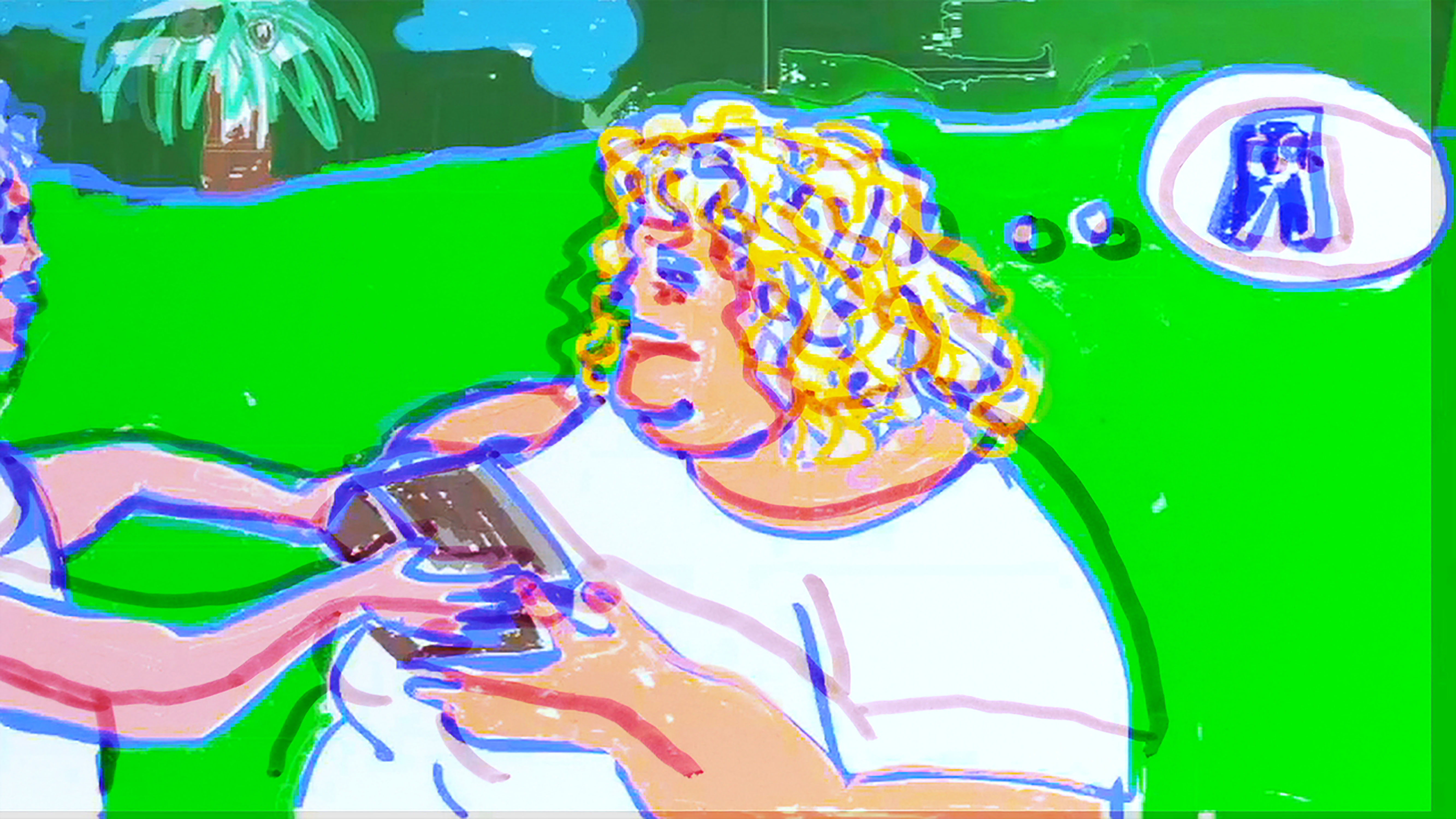 Still from The Lingerie Show (2015) by Laura Harrison

Collaboration has proved very fruitful for me. I work with an amazing musician, Jim Becker, who softens the potential harshness of my work with his gorgeous music. I love working with other writers, Beth Raymer and Robert Irwin are two fantastic writers I work with (most recently on The Lingerie Show with Beth Raymer). I learn from them, and it is a relief to be away from my own voice sometimes. I have also had the good fortune of working with great actors: my current film Little Red Giant, The Monster That I Was, features Amanda Sukenick, whose tough but poignant performance and script improvisations really created an internal structure for the film. Without her it would have been a pretty thin narrative. Also the wonderful writer Michelle Hoover, for whom I made a trailer (for her novel, Bottomland). Also I want to credit Maia Lynch whose editing on The Lingerie Show was fantastic.

As a painter who has exhibited in galleries, what are your feelings on the potential contexts for showing your animations? (such as festival screenings, online or in gallery shows, or elsewhere?)

I am open to showing my work on any forum provided it’s a good context for it. I don’t, for example, think my work thrives when it’s on a tiny screen like a cell phone. I think it needs some space for the parts of the whole of the images to speak most effectively. Which isn’t to say that it doesn’t work on a smaller scale like a laptop, it just creates a different kind of intimacy. I aim to create a social space with my animations. Ideally, viewing them would feel like attending a crazy but really interesting party. I also worry sometimes in gallery contexts that people are not prepared to enter the same narrative head space as they might in a black box situation, as they are far more conscious of their bodies in space. Still, that can work too, creating a more active dynamic.

Trailer for ‘Bottomland’ by Michelle Hoover (2016) by Laura Harrison

What current projects are you are involved with?

I am currently working on an animation called The Limits of Vision adapted from the novel by Robert Irwin about a housewife who loses her mind but gains the world.

Which artists / filmmakers / animators have inspired your own work in animation? 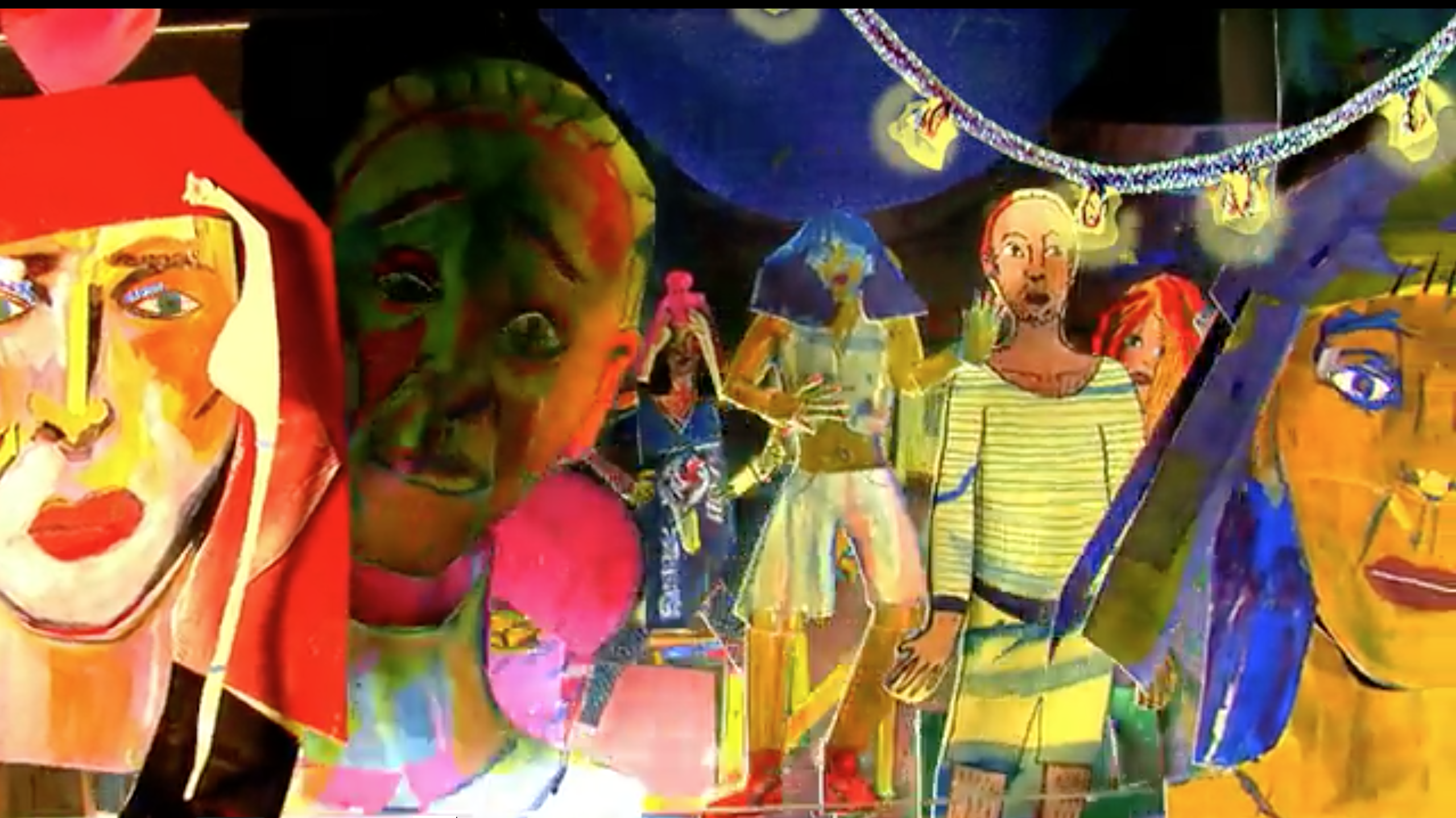 Still from Little Red Giant, The Monster that I Was (2016) by Laura Harrison