The animated films of Peter Millard are chaotic, brightly coloured occasions. Animals, fruit, household objects and human figures expand and erupt wildly, producing endless streams of yet more stuff, punctuated by blasts of jazz, car horns and softly humming men. His films are chain reactions, with all the everyday stuff of life transformed into a living child’s drawing – joyful, unnerving, funny, loose and daft, yet composed and crafted in such a way that they are anything but throwaway.

With his animations Peter has made a language entirely of his own, but one that I find that I understand completely. They reveal the meaninglessness and oddness of the things around us with great glee and manic charm. They have a purity and an energy that is infectious and exhilarating, and they really embody the reasons I am excited by the potential of experimental animation as an art form.

Peter was recently kind enough to let me see his just-finished latest work Fruit Fruit, which is a fast-paced, squashy riot of oil pastel and paint, and is at times more abstract than his previous work. The drawings are closer and thicker too, and the overall effect is more immersive and intense. I interviewed Peter via email, and his answers provide an intriguing insight into his process and ideas.

EoF: Can you give a bit of biographical information about yourself?

PM: I’m 26 years old, from a small town in the West Midlands called Great Malvern. I lived in Wales for three years 2007- 2010 where I studied animation at the Film School of Wales Newport (now The University of South Wales) and went on to study an MA in animation at the Royal College of Art in London 2010 – 2012 where I have remained to live and make my work independently since.

EoF: How did you end up making animated films?

PM: I did a one year art course when I lived in Malvern at Malvern Hills Art College (now South Worcestershire College) which was more of a course aimed at mature students. I was 19 at the time and hadn’t studied art before. The course featured lots of life drawing and book binding which looking back I didn’t know what I was really doing but it was really fun and learnt a lot talking to people a lot older than I am.

My teacher mentioned it would be nice to see the drawings I made moving and quite spontaneously I applied to do animation at universities and was accepted at Newport University in 2007. I didn’t know there was such a thing as independent animation and probably at the time I imagine my parents were a bit baffled as to why I wanted to study it, but they really supported me and the rest is history.

EoF: Can you say a bit about the distinctive style of your films – how ‘intentional’ is the style, is it just ‘what comes out’? How much does it relate to other film / art  / culture etc.

PM: When I was doing a lot of life drawing I would find the long pose exercises difficult and not exciting, whilst the exercises where you draw for a few seconds and then change pose I found a lot more exciting and enjoyed the results a lot more. I really liked the imperfection that would be made, you could still see it was the shape of a human and the line was a lot more confident due to you not thinking about it too much, whilst with the longer drawing it was more restrictive and rigid. Then I was introduced to artists like Basquiat and Dubuffet which gave me confidence to continue developing this way of drawing which I then adapted to animation.

Now its a bit like hand writing, I’m wanting to make it even looser and more strong by using materials that don’t let you think too much about the drawing, like oil sticks and paint, as with a computer or pencil the temptation to rub out and redo is great, so its nice to work with these materials as you embrace mistakes a lot more and try to incorporate them in the work.

EoF: To what (if any) extent do you start with a plan or a series of ideas? or does the film come through the drawing / animating?

PM: At the moment I’m making work where I’m trying not to think about what I’m doing and just drawing. I find experimental jazz like Charles Mingus or Ornette Coleman can really help your mind and body moving when you’re drawing so you have no time to stop and think. I guess its changed from film to film though, I used to do a lot of stream of consciousness writing to get ideas out then make storyboards from that. But my last few films have been based on an idea or image and then made around it with not much planning.

EoF: How did the film Boogodobiegodongo come about? What was your working process? Did the process differ on this film to others?

PM: I had the idea pop in my head after watching a number of Screamin’ Jay Hawkins videos online, where he would do these great energetic performances and shout jibberish from time to time. I originally wanted to make up a jibberish language and then make a child educational program similar to Sesame Street but with a made up language. This slightly went off course.

I still remember doing the first drawing in my first week back from the Summer Holiday (the part with heads coming out a box) and then just kept going with no planning until I finished. I then had all the parts to construct together to make a film. My previous films I used to storyboard, although they would always change, but I felt my work was getting very rigid and then I made ‘Hogan’ completely unplanned (apart from everything had to be Hulk Hogan and it was to be three parts of roughly 20 seconds) and wanted to explore this way of working more.

I Put A Spell On You by Screamin’ Jay Hawkins

EoF: The sound in your work is extraordinary – can you talk a bit about the way you use it, how you want it to work with the image, why you use particular sorts of sounds?

PM: I used to make sound by making noises by myself in my bedroom. With my film ‘Custard’ which was my graduation film from Newport University I started to mix professionally recorded sounds and sounds from the college sound library with my own created noises, thanks to my housemate at the time Kassian Sheppard who really opened my eyes to the possibilities of mixing lots of different noises.  I still use my own voice as I feel it connects the sound and the image more, as there’s a danger of the two parts becoming separated.

EoF: Your work has some recurring elements – certain foods, animals, elements of popular culture; there is humour and violence, and a strong sense of chaos and the absurd. These might also describe a child’s experience of the world, primal and primary coloured – do you see your films as having any connection to the experience or perceptions of childhood?

PM: Yes I do, I try to work as spontaneously as possible so recurring things always pop up which is just the nature of working this way, I have no idea why certain fruits and animals do. A popular one that has turned up in my films are bananas. I really don’t like bananas but for some reason they are cemented in my head, I’m sure there’s a logical explanation.

I believe it does in a way, in a naïve way I really like to make my work brightly coloured as it cheers me up when making pictures. When I made Hogan it was horrible just colouring countless amounts of ‘flesh tint’ Hulk Hogans.

I like to think my work is getting more primal the more confident I’m getting with animation which is exciting to me.

EoF: Can you tell us anything about the new film you have been making?

PM: Yes, its called ‘Fruit Fruit’ and I feel it’s the next step I wanted to take with my work in a more loose and primal direction. I started drawing straight with oil pastel and paint, which has created a big colourful mess. Its fairly short at just over two minutes and I have tried to play with a lot more layers of sound. Recently I’ve started some more new work that’s slightly more abstract but it’s in the very early stages. 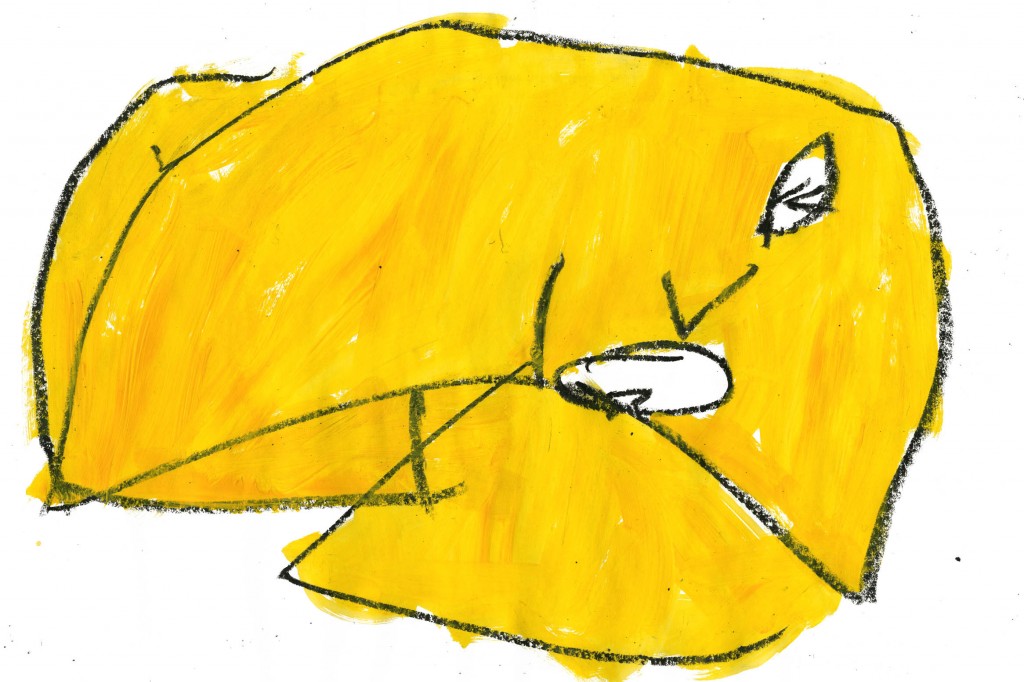 EoF: What are your feelings about the context that your work is seen in the outside world? Do you have a preferred way of people experiencing your work? Do you feel part of any kind of scene(s) or community? Does any of this matter to you?

PM: I think some people like my work but some people really don’t. Once you accept this you are free to do anything.

I prefer to have an audience and that’s why I still really enjoy entering my films into festivals, I find the Internet too easy to click away in the middle of a short, whilst in a cinema or public screening you’re more submerged and this is where I like people to be when watching my work.

On a day-to-day basis if I’m truly honest I don’t really feel part of anything, when I’m not working my part time job I’m in my studio getting on with my work. I miss the day-to-day discussions of when I was at the RCA as I really respected a lot of the people who I met studying there but I would like to think it won’t be like this forever. When I go to festivals or screenings I always end up making new talented friends and with the Internet I’m able to stay in contact with them, but would love to be closer to some of the people I have met to have that daily interaction with them.

It matters to me but it wont stop me doing my work, this year in a way has been a test for myself trying to keep working independently whilst trying to pay the rent etc and in the end as long as I can do both of those things I’m happy and could be a lot worse.