A few days ago I got back from the Czech Republic where I attended the Anifilm International Festival of Animated Films in Trebon, about a two hour drive south of Prague. What a ride!

Anifilm shows recent international animation and also offers a pitching forum where film professionals can interact with producers and distributors. There were people there from all over Europe, with perhaps a concentration of Central and Eastern Europeans. Anifilm’s mission is to present current trends in animation and support the production of new work, and in this they are succeeding.

There was a lot to see, a lot of people to meet, and also a lot to learn (on my part as well as the festival’s. More on the latter later). My short film The Whale Story was showing in a special program called Street Animation.  I took my audio recorder with me and captured snippets here and there. The result is a two and a half minute long audio collage, just to give you an impression of the festival:

In the clip you can hear animators, journalists, composers, producers, directors and programmers. Some names are: Drasko Ivezic, Nancy Phelps, Chintis Lundgren, Andrea Martignoni, Raul Garcia, Anna Ida Orosz, and a clip of Don Hertzfeldt‘s thank you video, broadcast during the award ceremony, for winning for his short World of Tomorrow.

Overall I felt the programming was pretty solid: there was a lot of variety, from competition shorts, to special retrospectives and interesting jury programs to recent animated features (for adults as well as children). Of course I didn’t get the chance to see everything I wanted, and I chose to opt out of a lot of the competition short programs because I had already seen a lot of the films.

There were two Chinese shorts that I found intriguing, both by Ding Shiwei. Double Act was in one of the student programs, and Goodbye Utopia was in one of the International Competitions. Both use a black and white palette, with heavy use of ink or black watercolor. Both are symbolic, and yet clearly political. I love a good symbolic political film! These were subtle, with an intriguing heavy soundtrack. I would love to watch both of them again in full and learn more about this animator. It seems Goodbye Utopia also exists as an installation which would also be cool to see.

There was also a really nice, short and absurd piece out of Singapore called Downtown. Made by Kapie Eipak, this piece doesn’t take itself too seriously, has a nice sense of humour and timing, and a great ending. It’s online in full! Enjoy:

I also got to see one of my favorite films from Animateka last year, Fok Nabo Distorio by Francesco Rosso. This is a film made by photographing lenses, gears and other round objects on a multi-plane animation stand, and playing the focus between planes. Frustratingly there is still no clip or trailer online, so here is a still: 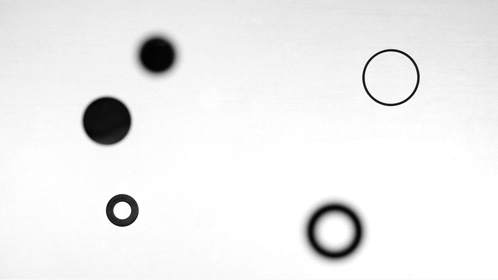 I also saw Michele Cournoyer’s retrospective and was really struck by her latest film, Soif. You can watch the trailer here. The thick black ink lines move languidly across the white paper, morph from a face to a glass, to a bottle, to a couple, to a man, to a woman, to a fish. All the movements and sounds are appropriately liquidy, and one is left not knowing for sure – is it comparing a relationship with a man to being addicted to drink? Or is comparing an alcohol addiction with a relationship to a man? It ends with a great gasp for breath, another perfect ending.

So far all the films I’ve mentioned have been black and white! Not intentional. Here is one in color. I enjoyed hearing from Bastien Dubois in a special presentation about his process for films like Madagascar, carnet du voyage, where he records actors in motion-capture suits, uses this data to recreate their movements, and applies water color textures to their faces.

I also really liked The Streets of Invisibles by Remo Rauscher. This ten minute film is made up only of screen captures of Google Street Views, Google Maps and Google Earth, and the audio is a mash up of police thrillers.  Really inventive.

The Streets of Invisibles (2011) by Remo Rauscher

The winning music video was Paradise Awaits for Zhu, made by Tomek Ducki. This music video seems to have been made by animating most of the movements in CG, and then printing out frames, repainting them, and then turning the images negative. You can learn more about the process here.

Music Video for Paradise Awaites by Zhu (2014) by Tomek Ducki

I really wanted to see Raul Garcia’s episodic feature film (aka a portmanteau film) Extraordinary Tales, based on the stories of Edgar Allen Poe, but unfortunately didn’t get the chance (watch the trailer here). I also missed Khalil Gibran’s The Prophet, also interesting for containing animated segments made by different animators, including some indie names like Bill Plympton, Nina Paley and Joan Gratz (whom I had the pleasure to meet at the festival). I will certainly be trying to catch these at Annecy!

But for me the most important part of this festival was the Visegrad Animation Forum.  This is a pitch session for animated short films and TV series from Central and Eastern Europe. Specifically I think one member of the team should be from the Czech Republic, Poland, Hungary, Slovakia, Slovenia, Croatia or Romania.

The first day of the pitches was dedicated to TV series projects in development, and we heard from 10 producers/directors who had about 20 minutes to present and receive feedback from the jury, who were representatives from Czech, Slovak, Hungarian, Polish, Slovenian and Estonian TV channels. It seemed like the jury members were seriously considering the pitches presented to them, and whether they had a slot for a show on their channel for that target age, or a show with that length of episodes, or whether they would be willing to financially contribute to the project. In other words, business was getting done.

There was only one TV series presented that was not for children, and this was of course by far my favorite. Manivald and the Absinthe Rabbits is a series proposed by Estonian director Chintis Lundgren and Croatian producer Drasko Ivezic. It follows a socially awkward and naïve fox who moves to a new town and encounters strange neurotic characters. The presentation was hilarious and effective, and everyone loved it. Sadly all the broadcast representatives said they loved it, would love to see it themselves, but didn’t have a slot for an animated TV series for adults on their channel. I don’t consciously make films for children, nor am I involved in a TV series project, but this was an interesting wake up call to just how children-focused most TV possibilities are. If you make stuff for adults, your options are different. As for Manivald and the Absinthe Rabbits, I have faith they will find a way into the TV arena somehow.

The second day of the pitch sessions was dedicated to short film pitches, and this was of more personal interest to me. I don’t think I’d ever actually attended a pitch session for short films before. We heard from ten teams who were presenting projects ranging in length from 5-20 mins, and ranging in budgets from 45,000 to 120,000 euros.

Whereas most of the TV series pitches had been very male dominated this session had a lot of women presenting, and three of the films had explicit themes of feminism or gender roles. The jury rather than TV broadcasters, was made up of three studios or production companies from Berlin, Lithuania and the Czech Republic, one Hungarian distributor and one creative producer from ARTE Creative, a digital art arm of the French ARTE TV Channel. There were also a few other people in the audience who piped in and asked questions, and seemed to be interested in helping fund some of the shorts.

One telling question asked by one of the jury members to a presenter was ‘What artistic position can you give to a co-producer?’ This question really made clear how the system works: they might give you money to complete the film, as long as some of the money is spent in their area: the composer, the animator, the post-production sound person, someone, must be a creative force in the project. If your team is already complete, it is hard for them to co-produce.

The atmosphere of this pitch session seemed more relaxed than the TV series one, and there were fewer hard offers that seemed possible. It seemed more that if someone in the room liked your project they would come up to you afterwards and talk to you privately about a potential co-production.

Overall the pitch sessions made me realize more concretely how, though difficult, it is possible to put together a large budget for an animated short film in Europe. And they also made me realize how participating in the pitch sessions themselves, even if you don’t win, is a great networking tool. And, I realized that a lot of the relationships on stage, between director and producer, were forged at animation schools, at other festivals, or training programs like Animation Sans Frontiers.

There was a lot to see here, a lot of people to meet, and a lot of knowledge to absorb. But there were unfortunately also some technical problems: some of the films were in English but shown without Czech subtitles, or in Czech without English subtitles, or shown without sound altogether, or played in fits and starts, or in the case of one film, only half of it played before stopping completely. There were also some problems on the organizational side, resulting in miscommunication about payment for accommodation, missing tickets or passes and confusion about how to acquire tickets.

Putting on a five day festival is a gargantuan organizational task, and I completely understand that problems can pop up. These problems were not so serious on their own, but taken together they could really dampen the experience for a less experienced festival goer. So though I heartily recommend everyone to attend this festival if your film is accepted, because you will have a great time and meet a lot of interesting people, if you do attend, follow this advice (good for every festival anyway): double check everything. Ask about airport pick up, ask about a Q&A after your screening, ask if your film will have subtitles, ask what your pass gets you, and if you need to reserve tickets despite it, ask if there’s any special events for filmmakers that aren’t listed in the program.

Do this, and you will be able to take full advantage of this wonderful festival. Plus, the beer in Trebon is only one euro a pint! So mark your calendars: the deadline for next year’s festival will probably be around the end of January 2016.